A Year In France, Reviewed

Shortly after we landed in France we were asked to put together a little comparison of life in Sweden and France for other immigrant families who subscribe to this popular expat service based in Paris.

It took me nearly a year to get 'round to it - to the surprise of almost no one in my family.

I'm not sure if this will even be published elsewhere, but I spent too much time on it not to put it somewhere!

How long have you lived in France, and where did you move from?  How many years did you live there?

We moved to France in December 2013, driving down from Sweden where we'd lived since 2010. I'm a consulting geologist and my wife, Elena, is a research biologist (and now professor); an opportunity for her in Uppsala sparked our move to Scandanavia. We spent 2009 living nine time zones apart when she went to work at Ludwig Maximilian University in Munich, Germany, and I continued my work in Portland, Oregon, where I'd lived since 2000. So - Sweden was our first expat experience, and a crucible for us in some ways.

Sweden was incredibly good to us. We got married there; started our family (the boys are now 1 and 3); and we both turned 40 there. Some of our stability was because we could both work, courtesy an unrestricted work visa the Swedish immigration service granted me as partner of a “visiting researcher” (in France I have to wait 30 months for such a visa). Of course the famous parental leave - 480 paid days per child, typically shared equally between Papa and Mama - gave us security to ultimately buy an apartment there too. Housing is a problem if you don’t own your flat - we moved five times in our first two years in Uppsala. 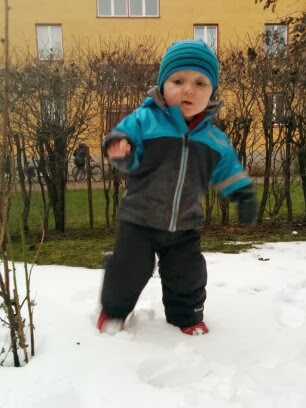 Finally, Swedes recognize their language doesn’t extend far beyond their 9 million inhabitants (and a bit of Iowa) so their enthusiasm for speaking English made our transition very smooth. Sadly, this made it too easy to just rely on English - after three years I understand the language but I still don’t speak it. Swedes simply switch to English when they hear my ridiculous accent. So far the French appear to have higher expectations.

What do you miss the most about living in Sweden?  If there's one thing from Sweden you could bring to France, what would it be?
This is a hard comparison for us, as we both experienced 'different Swedens' in a way, and have our own fond memories. We both miss the gender neutrality of the childrens’ clothing. Elena mentions the pastoral landscapes, red barns and rolling hills; it's quite distinctive. I got to travel north and work in arctic Sweden, and participated in the famous Vasaloppet ski race which traverses Dalarna. Personally I'd import a bit of winter snow and ice, or perhaps my ski club. They were a unique and extremely inclusive group, which I miss!

However, one of our favorite comparisons between Sweden and France is familiar to most professional migrators: IKEA. Our French flat is typical, with no built-in storage. Our moving truck deposited 30+ boxes of books alone in our livingroom - without one bookshelf. So - to IKEA. Now IKEA, of course, is a Swedish thing, and they take it more seriously than Americans take McDonalds. It's organized, buffets are well lit and stocked during holidays - “it just works”. As with nearly all Swedes, they speak English if you find yourself in a pickle.

So we drive to IKEA Thaias Village, arriving for lunch with the kids (so we could shop while they napped). Immediate “we’re not in Sweden” moment #1: carafes of wine, bottles of IKEA beer, lining the buffet! All wine and most beer in Sweden is restricted for sale in the state-owned (and taxed) Systembologet stores. Also the produce was notably fresher, due to the latitude no doubt, and we had the impression that the menu got more scrutiny here.

After an hour or two in the IKEA maze we end up in the warehouse, carts groaning under flatpack, hunting a couple elusive PAX drawer sliders on Help-Yourself computers. These are a dead end, spitting out a message to “stand in queue to talk someone”. After 30 minutes in the queue with two now-wakeful kids we learn they're maybe on the truck, and might be in the warehouse within the next two days. Maybe. No problem, we don’t need those to get started … But as we work on down our list we realize half the critical items - the actual hanging bars for the closets, the childproofing for the bookshelves - all require getting BACK into that line, as they are neither on the shelves nor in the computers.

And so as blogger/author/chef David Lebovitz says, WTF - Welcome To France.

Far from disparaging IKEA France, we continue to go back, and consider our first French Christmas tree - a Christmas Eve freebie from the IKEA lot - a tradition. Bought ours there this year. It’s just hard to understand how a system which works so seamlessly in Sweden, even the US, crumbles in a Parisian suburb.

So - to address your question - we would love to import the “it just works” manifesto from Scandinavia! More about that below...

What aspect of raising children in Sweden did you really appreciate?
Elevators. It's often stated in Sweden, "Everything works" or “it just work” -- and it's a subtle trueism. When you're pushing a pram loaded with two kids and accoutrement, suddenly a broken escalator next to an out-of-service elevator means you aren't going to get someplace - or are going to get extremely sweaty doing it.

I got into this exact pickle one day visiting Nanterre with both boys on my own. To my surprise, a complete (and well-dressed) stranger recognized the WTF look on my face - came over and helped carry our massive tandem wagon (+30 kg) up a flight of stairs. This kind of thing has happened time and again for us in France.

Would it have happened that way in Sweden? Maybe - I have doubts, as in Scandinavia it feels like an invasion of privacy to simply hold the door open for the next person. Too confrontational. The question doesn’t matter though, as it wouldn't have been necessary - since there, “it just works”.

To qualify this - on a long drive to Dalarna one winter our oldest boy was repeatedly carsick, and the last time I did an emergency stop for him I discovered the road shoulder was more snowbank than shoulder, and got the car stuck in a bad way. Within minutes enough Swedes had stopped to help that we didn’t need a tow truck - they simply pushed us back on the road. They certainly recognize a bad situation when they see one. 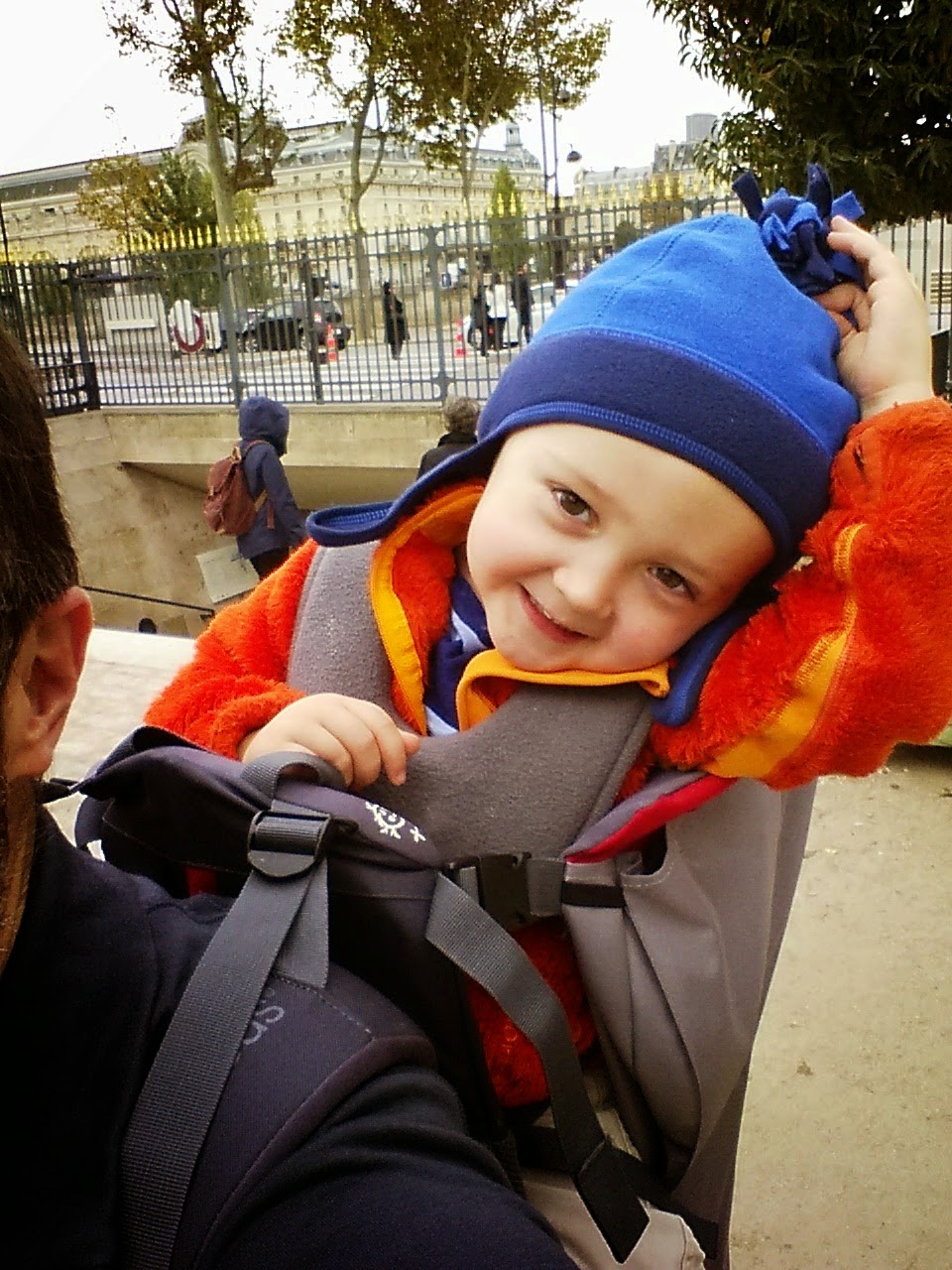 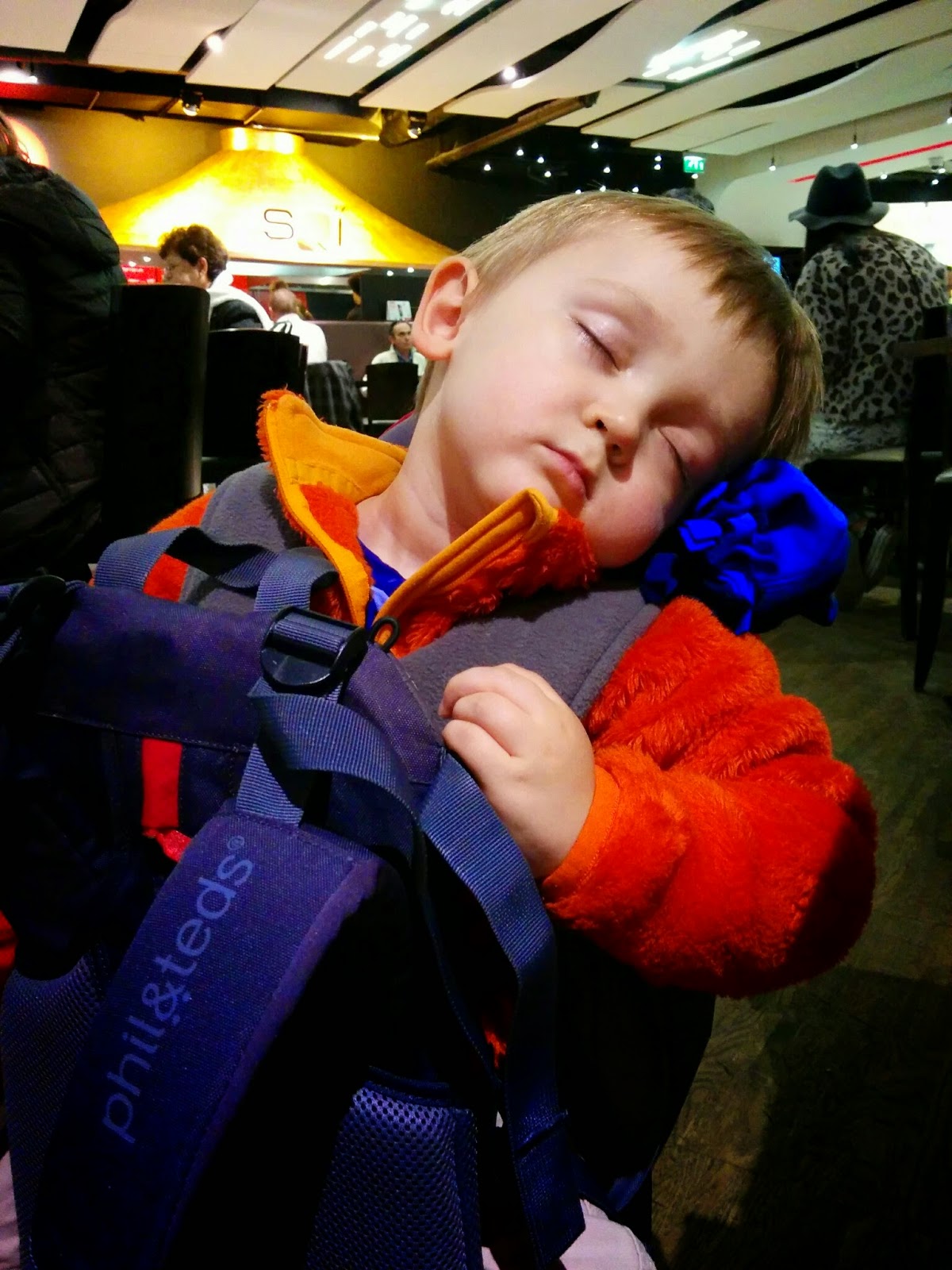 What do you like the most about living in France?
It’s been a year, and this has evolved. Food? Wine? Rain? Actually - enthusiasm is our answer.

People are very passionate about things in France: wine, cheese, language, their bike lane. The way a turkey should be cooked, American holiday or not. This is something familiar from the US, and we appreciate it.

One contributing factor could be la politesse - the social greetings which are standard. We’re struggling to pass appreciation of this along to our three year-old somewhat - he hasn’t mirrored a single one of our bonjours to our marvelous gardien, for example - but it’ll come.

The same thing that attracts so many visitors to France - historical architecture, unchanged streets - drives so much of the country: tradition.

What was the biggest adjustment to raising children in France?
So far we're all four struggling with the language. Took nearly a year to get the kids on Elena’s carte vitale. We’re in a more urban environment here - I ran and cycled a lot with our first son in a Chariot in Sweden, and that’s a bit less fun in local traffic.

Toilet training wasn’t a big issue in Sweden, where some big kids still wear diapers, and daycare manages it (with 1:3 or 1:4 ratio of adults to kids it isn’t a big problem). Here, of course, our older boy got tossed into the deep end of the pool. Keeping this in mind when tracking a new language he doesn’t hear at home has been tough for him.


These things aside, we love the teachers at maternelle and the employees of our younger son’s garderie, and the maternelle pushes 3 year-olds to do things we might not imagine they could do. We hear a lot about school lunches. Now that we’ve navigated CESU and found a good nounou a lot of our impossible schedule stresses are relieved a bit. 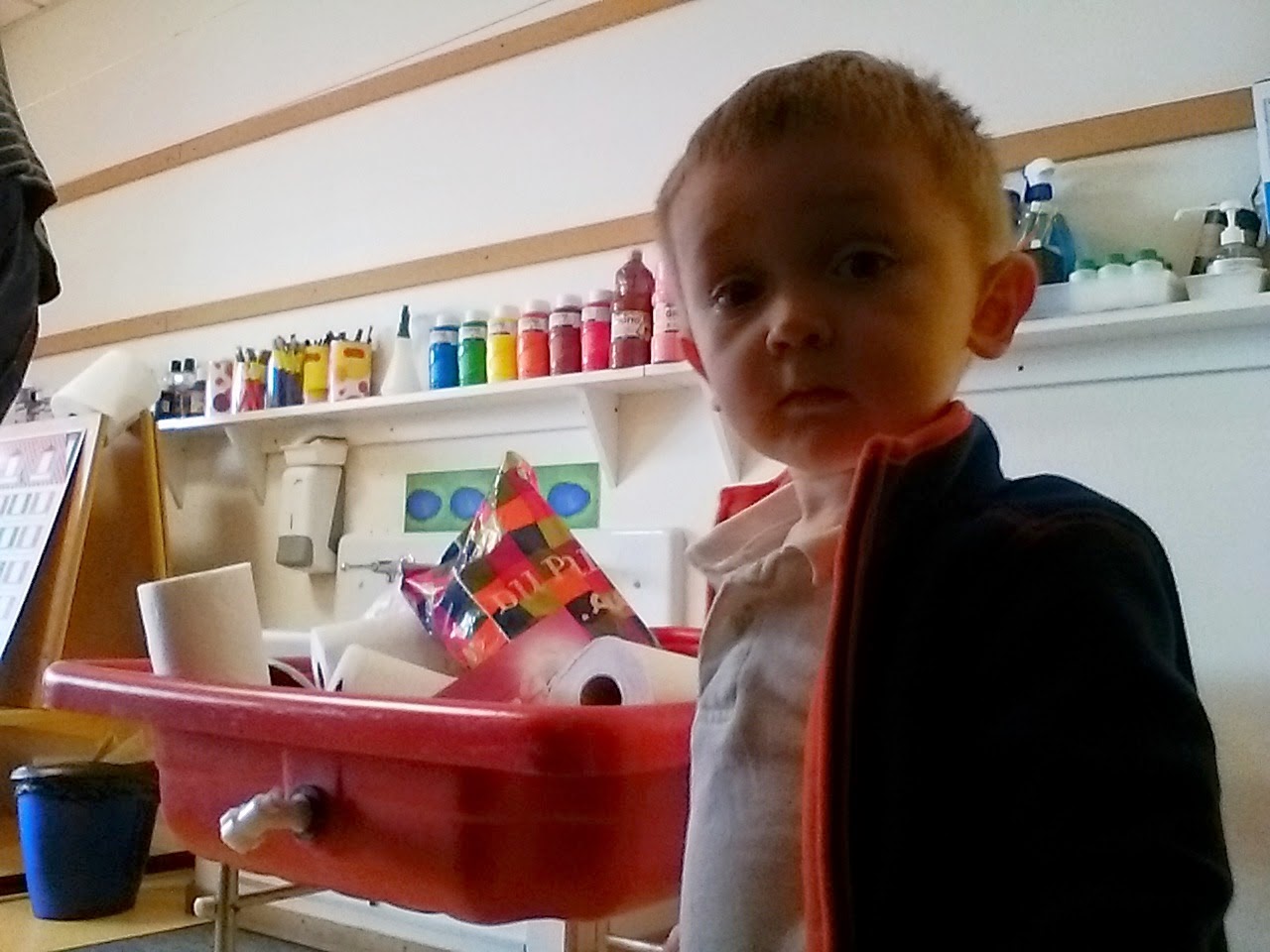 What do you like most about being a parent in France?
Same as being a parent anywhere I guess, along with the belief that we're giving the boys a little extra advantage in life by growing up multi-lingual international environment.

France also has these wonderful little pocket parks tucked away in each neighborhood; the boys have their favorite big park, and love the various amusement parks in town, but some of our most fond moments are from empty little parks with one slide. They all seem to be well-maintained and clean, somehow. 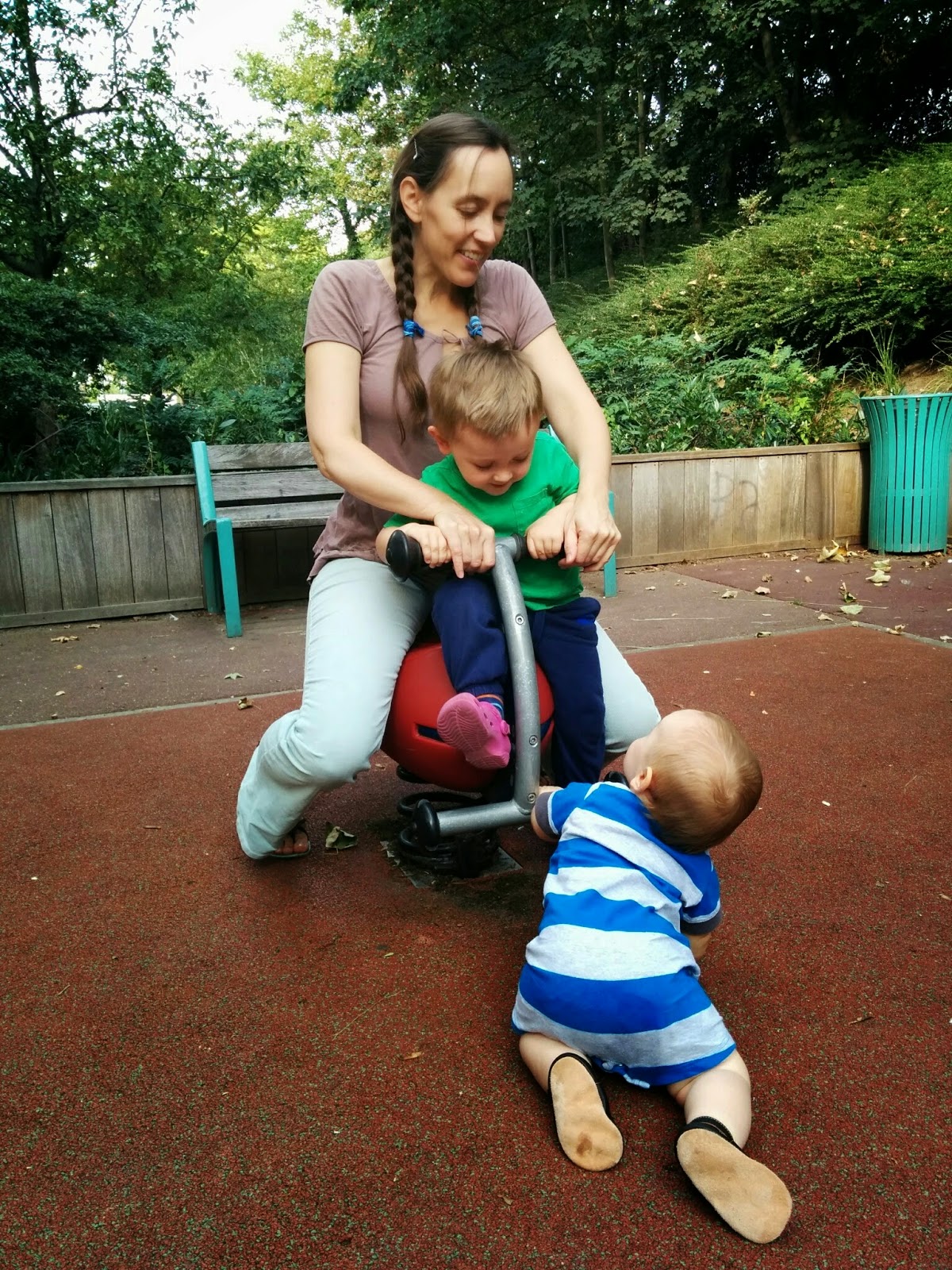 Any advice you have to families with children who are moving to Sweden?
Did you mean France instead of Sweden? I'll answer both.

Sweden is pretty gentle - call it "expat light" for Americans or Brits - as the language is relaxed, most things can be done online, bills and banking is pretty straightforward once you have your personal number (social security number, "personnummer", becomes everything from your driver's license number to your identification for renting DVDs).

France is not particularly gentle to families in the same way Sweden is - however, it ultimately is harder to fall off the map here than in the US! The social safety nets and health care are hard to beat; the public education system is excellent (in our limited experience and more extensive research); and once you figure out confusing systems like the CAF and CESU (with the help of messageparis.org no doubt!) they work well.

I’ve watched a few of the lists created for new parents arriving in France, but I now lean toward the “bring less rather than more” camp. We’re a bit weighed down by the family paraphernalia we have these days, to the point that - if we found a lighter, cheaper and nicer apartment than we live in now - we still wouldn’t move until we know where I will work long-term.

But here are some tips: 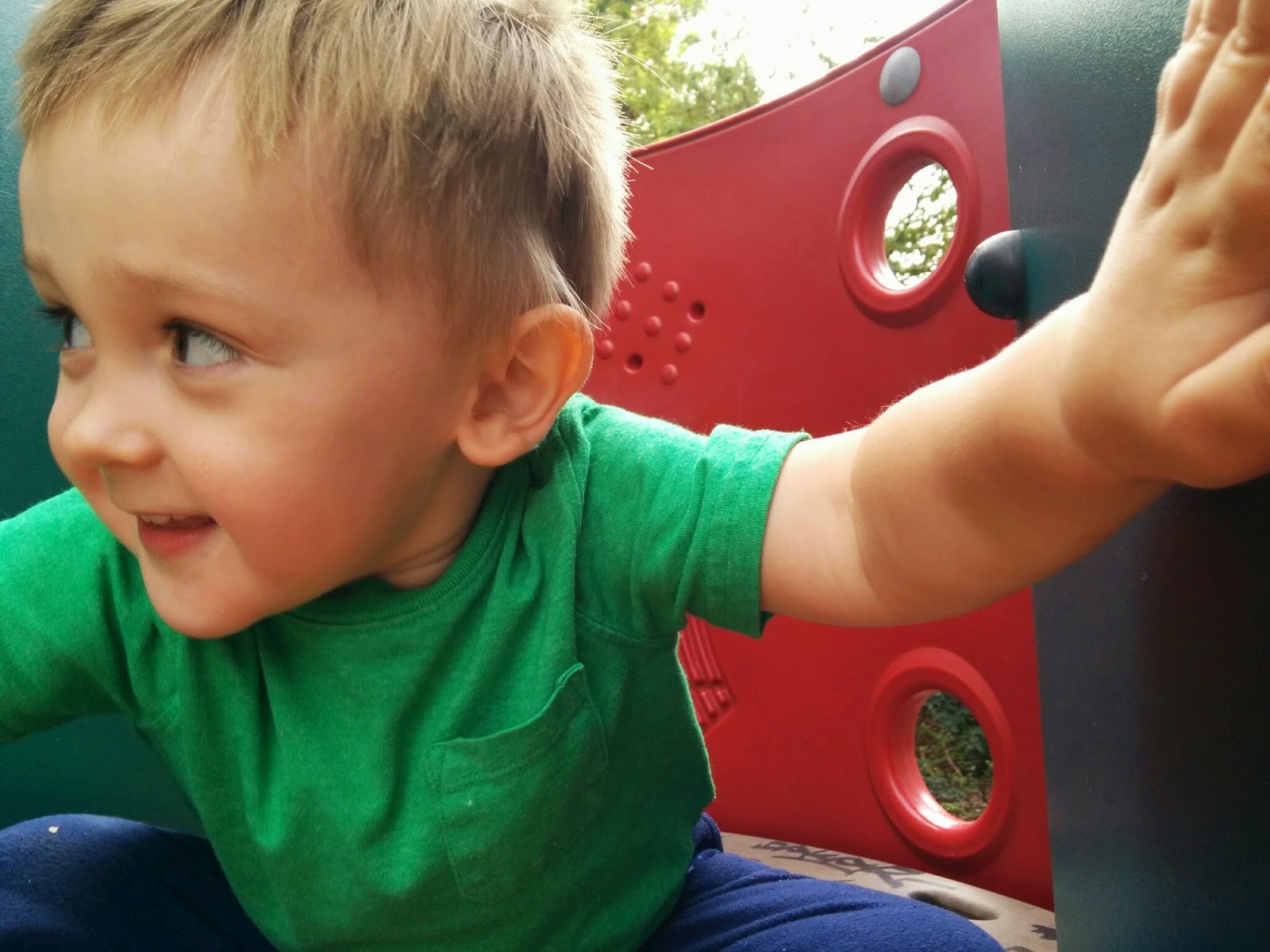