So, January 12 to June 18 - 157 days since I last hit the Publish button. I haven't written much in between, but would like to tie together some events - even just in my mind - for the simple sake of continuity.

And someday I'll get around to adding photos of our actual move in, including that massive roast chapon and free IKEA tree.

Last year in March my Mom had a bad fall at home (coincidentally on my first trip to Paris). The impact exacerbated some existing injuries (prior falls), and created new ones, hard to diagnose. Thank goodness she had strong advocates nearby, since I wasn't - the ER doc interpreting the x-rays tried everything to get her discharged, seeing no fracture. "She needs to get up and walk!" An intervention by school peers who knew her better and an MRI by another doc confirmed multiple breaks in several places of the pelvis, an extended stay, and lots and lots of rehab. Perhaps most significant for Mom - a substitute teacher would finish her school year.

We barnstormed the US in June, an adventure with a 6-month pregnant Mama, starting in California, then Utah for Elena's conference, and finally Boston to visit my parents-in-law. Oliver had already been on intercontinental, but not so close to the dreaded 2s... 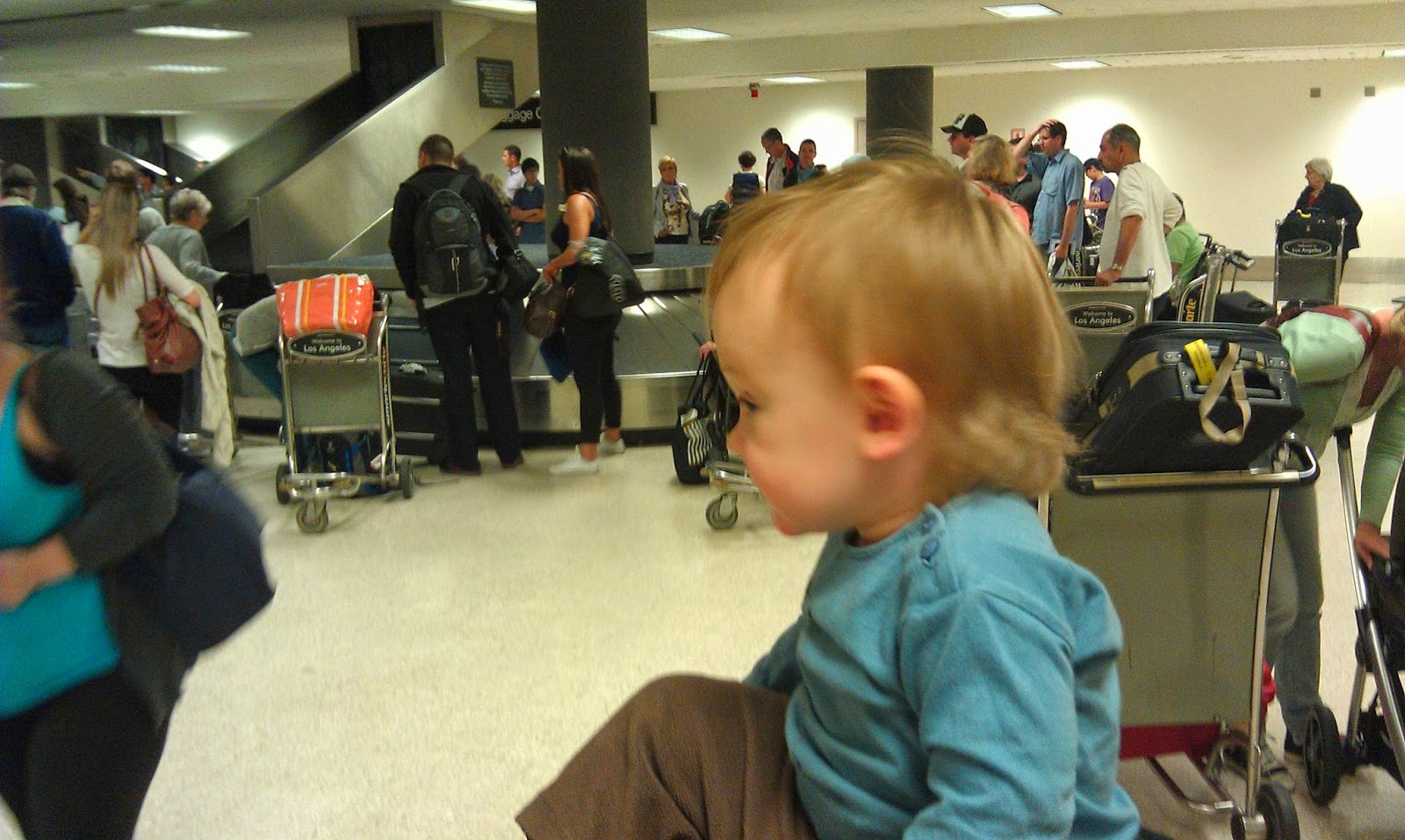 Oliver first visited Porterville just after he turned 1 (in time for Thanksgiving, naturally, for those who knew Mom's entertaining habits), but this time he got to know Mom's project yard and her - he calls her Nana - for who she was. She got to be both teacher and grandmother, though I know she felt limited in her mobility and endurance.

They struck up a special relationship - one she'd anticipated for quite a while. 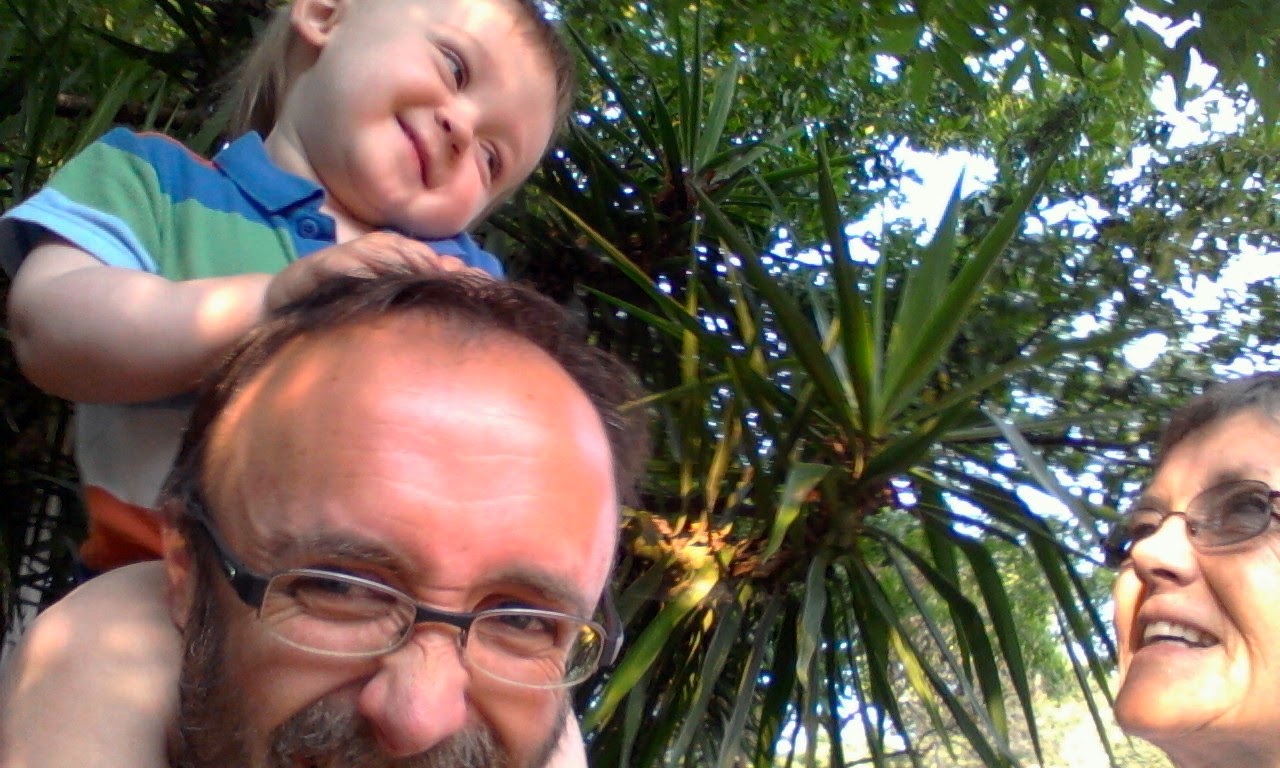 Sending us on our way to Balch Park (don't forget the ice chest)... Sorry Mom, I'm posting this one anyway. What a smile. 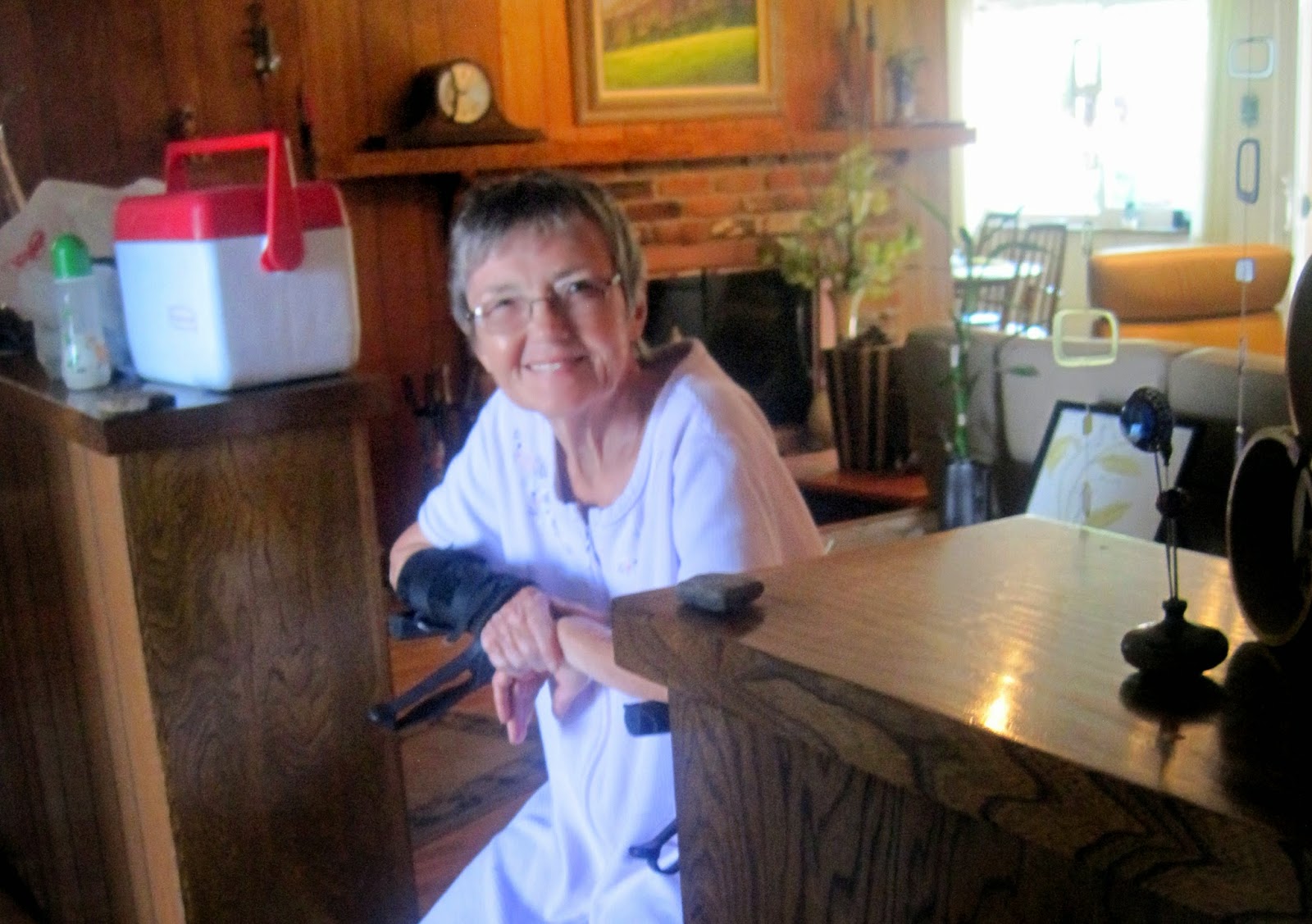 Introduction to the Sierra west side (and lengthy, windy roads, ugh): 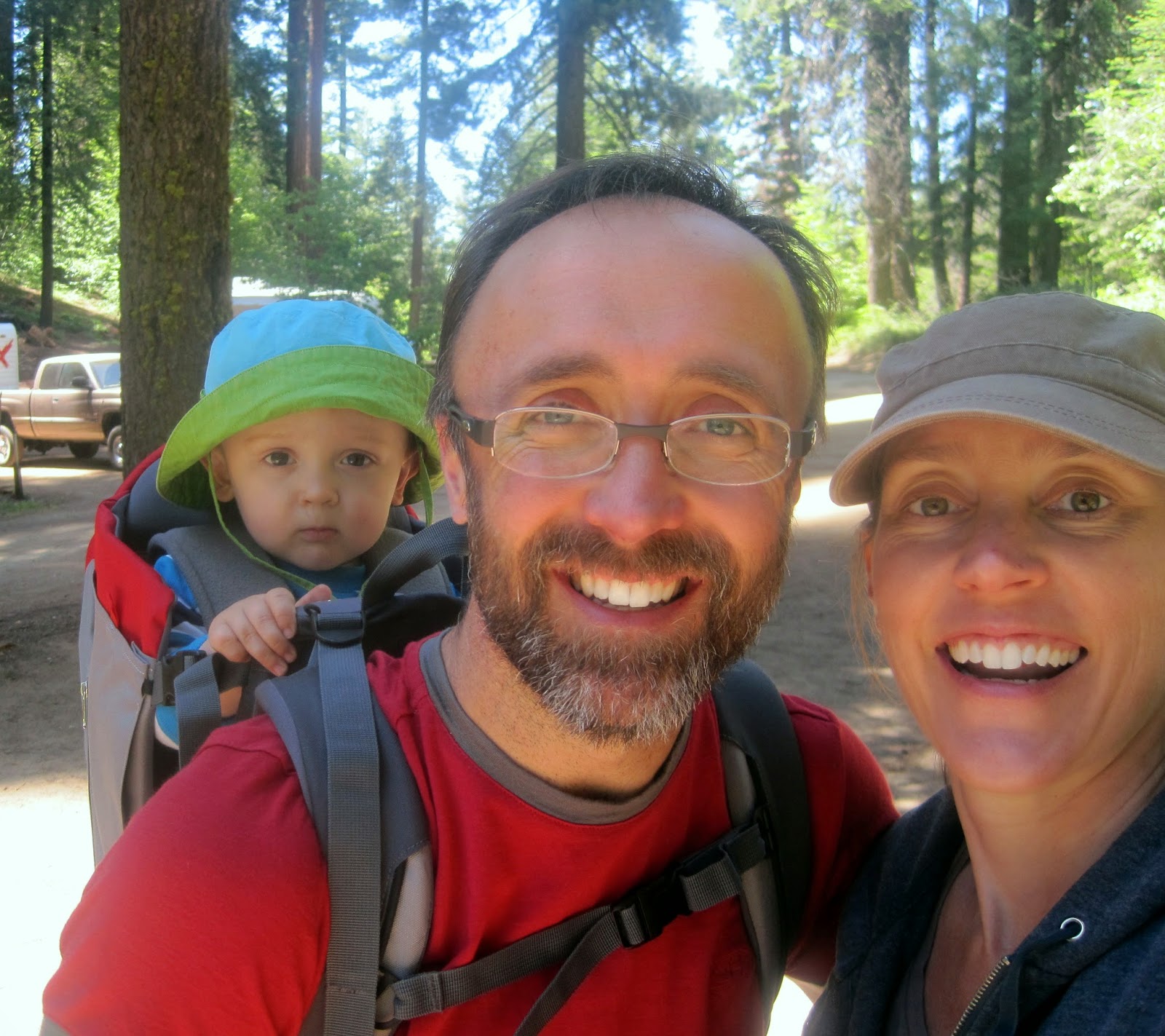 Then we left mid-June, and Mom celebrated her 71st birthday with friends in July - ladies from the families Buckton and Crawford, as far back as I can remember. I sent her a new digital camera, which I seem to have all the photos from merged into my Picasa files somehow, which has created rather an odd effect. Some birthday shots: 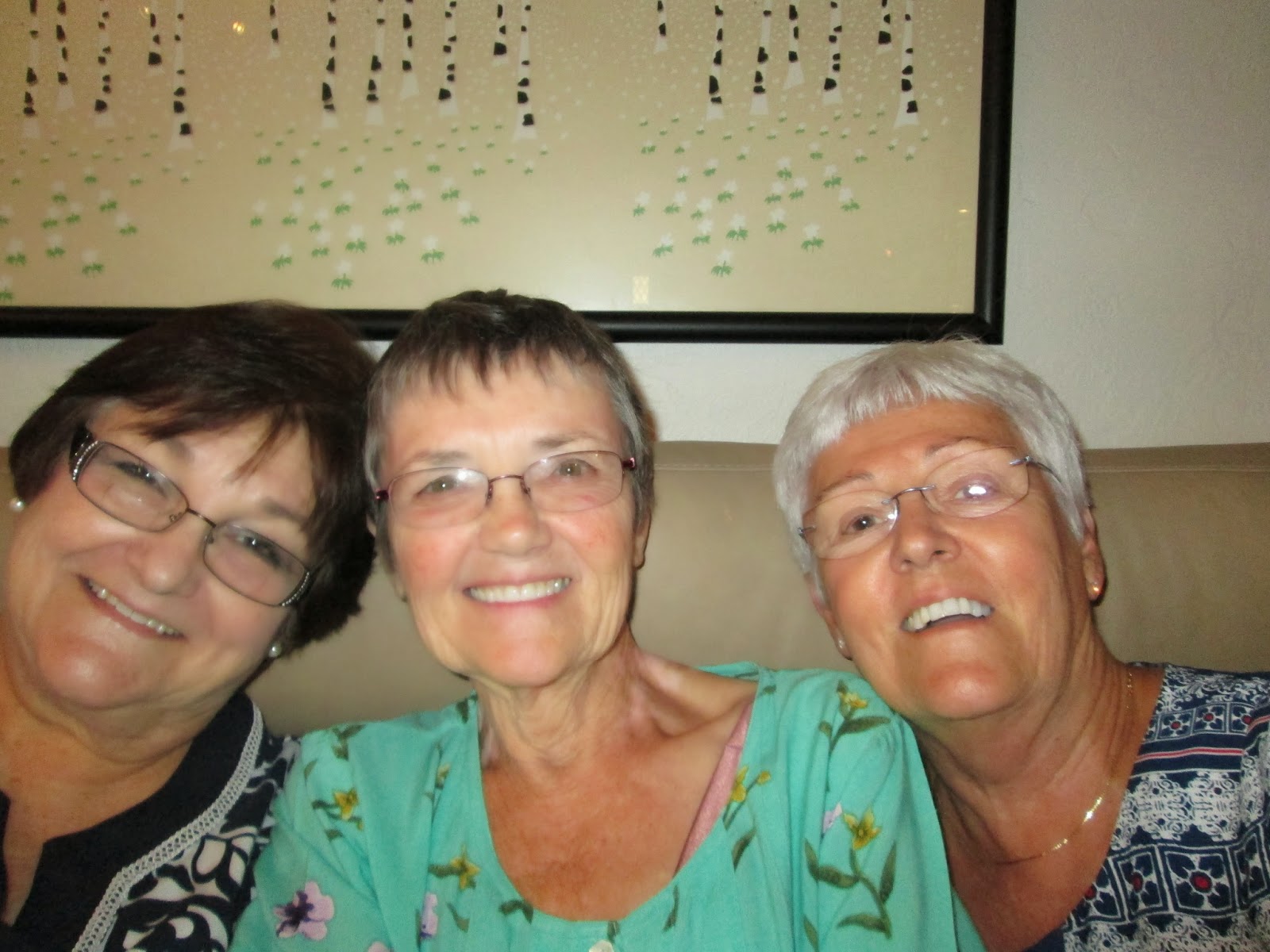 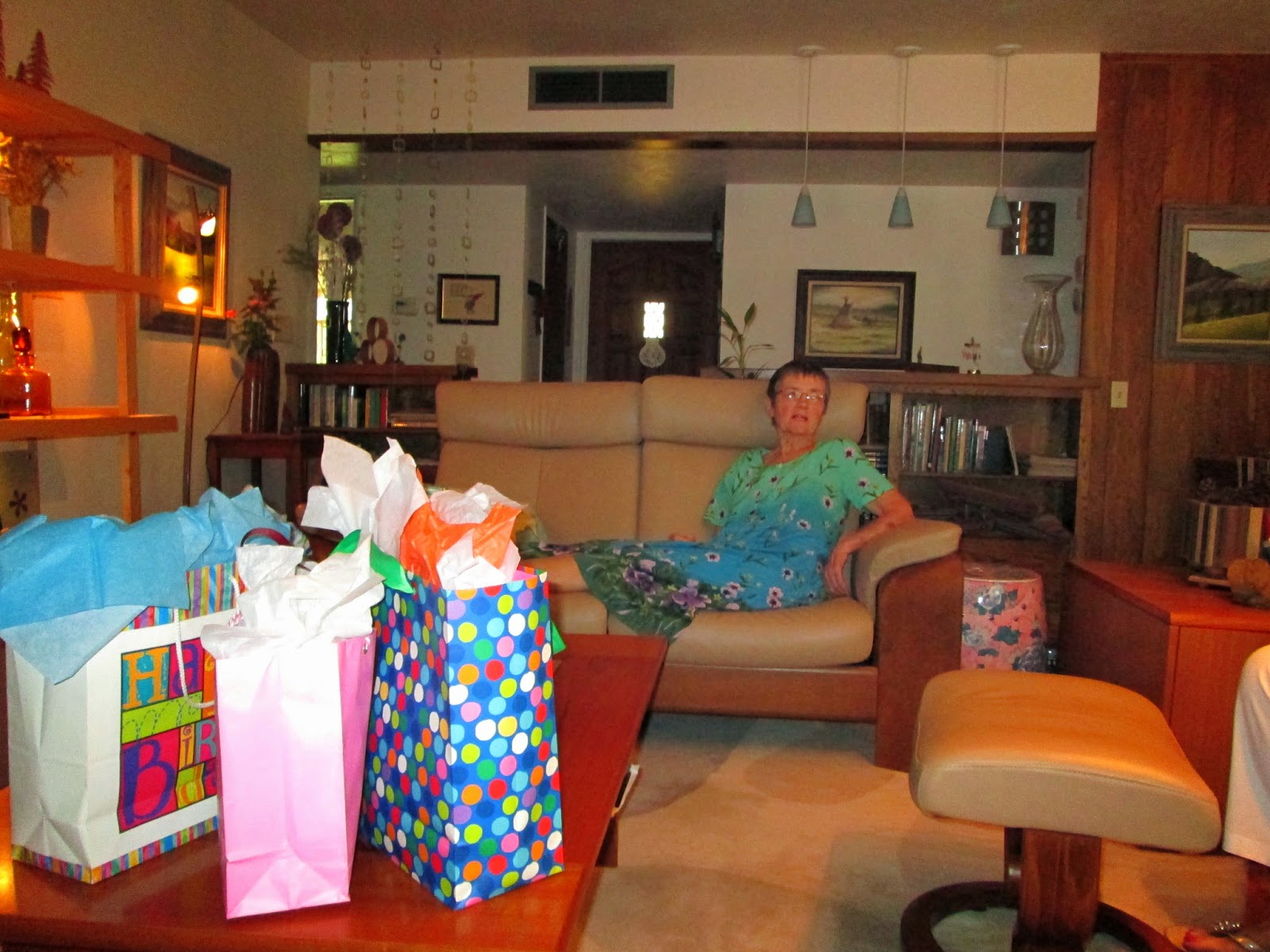 Juxtapose this with ... total silence from Sweden. We were busy at home, me with a big project at the office, Elena with a big project at home. My mother in law Mary Berg arrived that first or second week in September, and Sebastian - our second son - came to visit on lucky Friday the 13th. It had been freezing overnight already, but not too cold to rollerski weekends.

Back in California Joan sent Mom a beautiful bouquet of flowers either late in September or early October, and she photographed them. And took a number of shots of her garden, and her dog, and the fish. 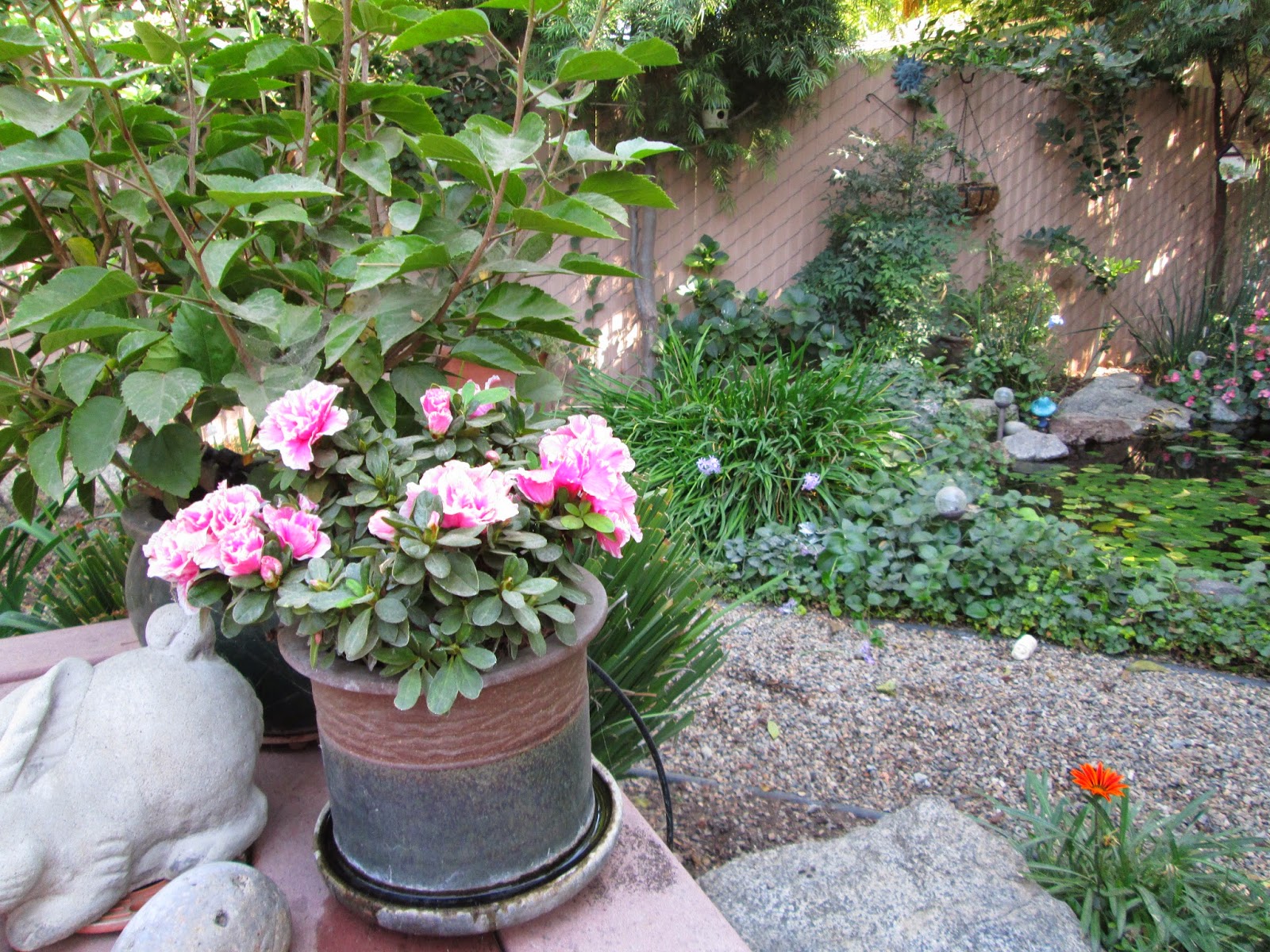 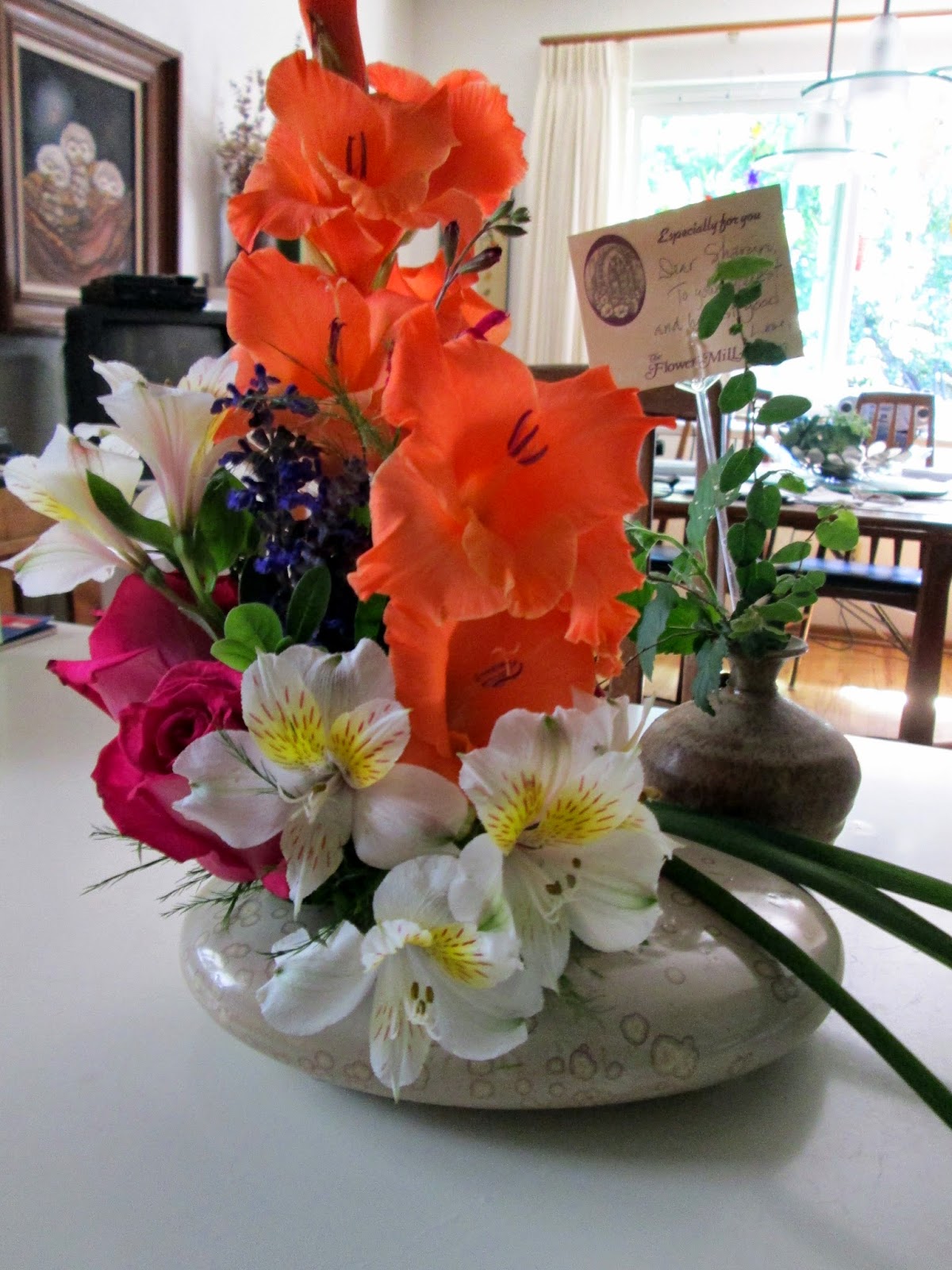 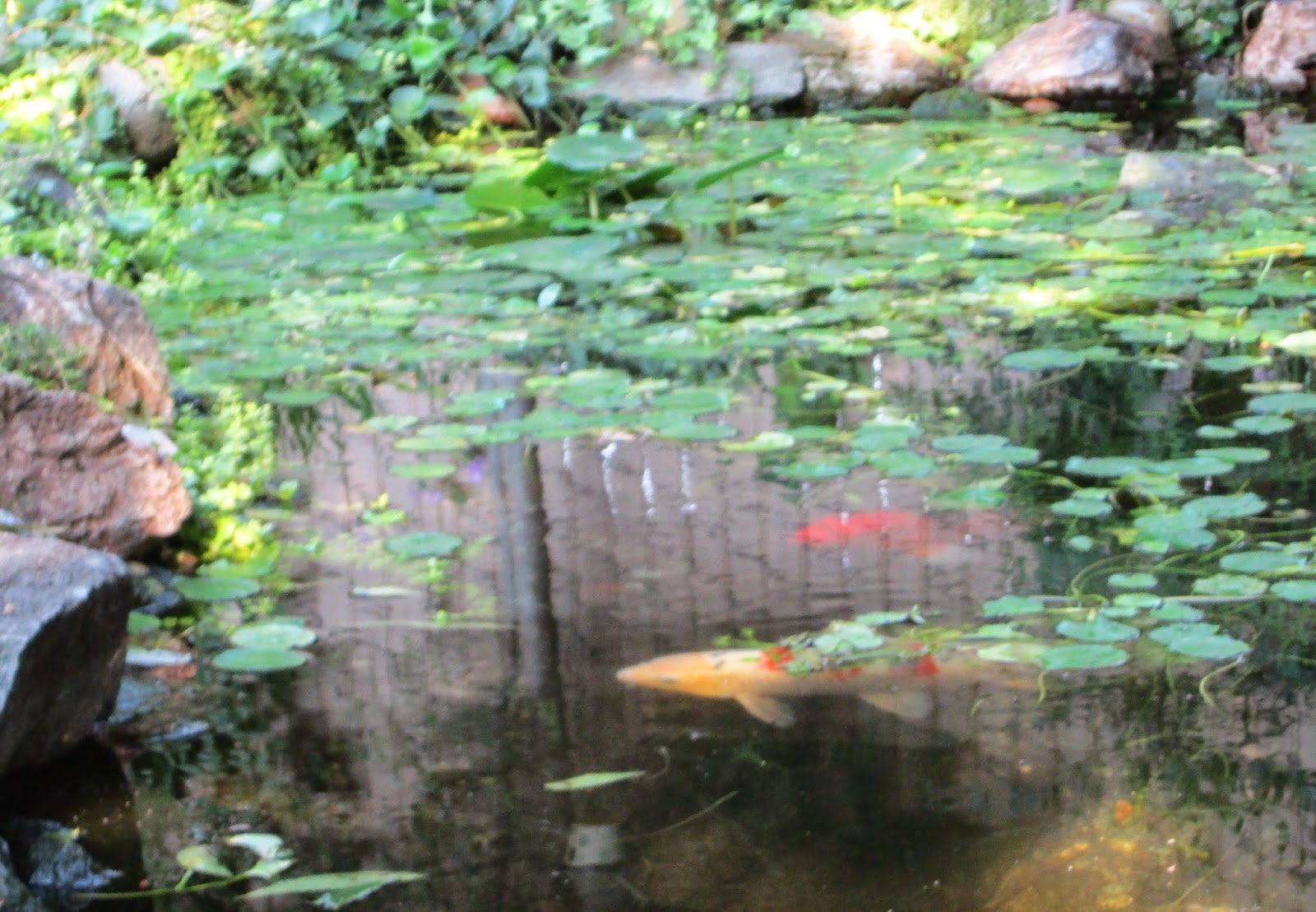 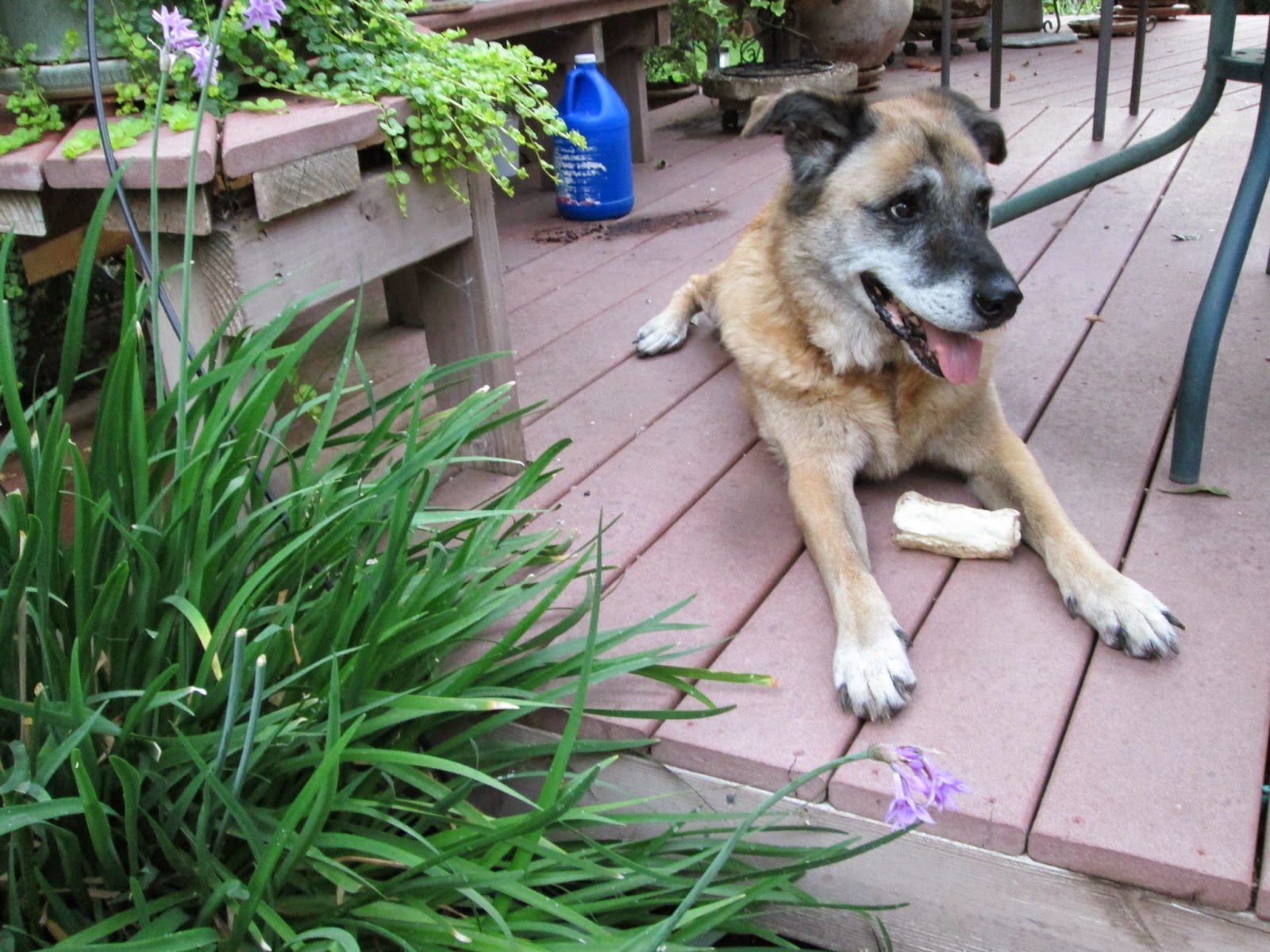 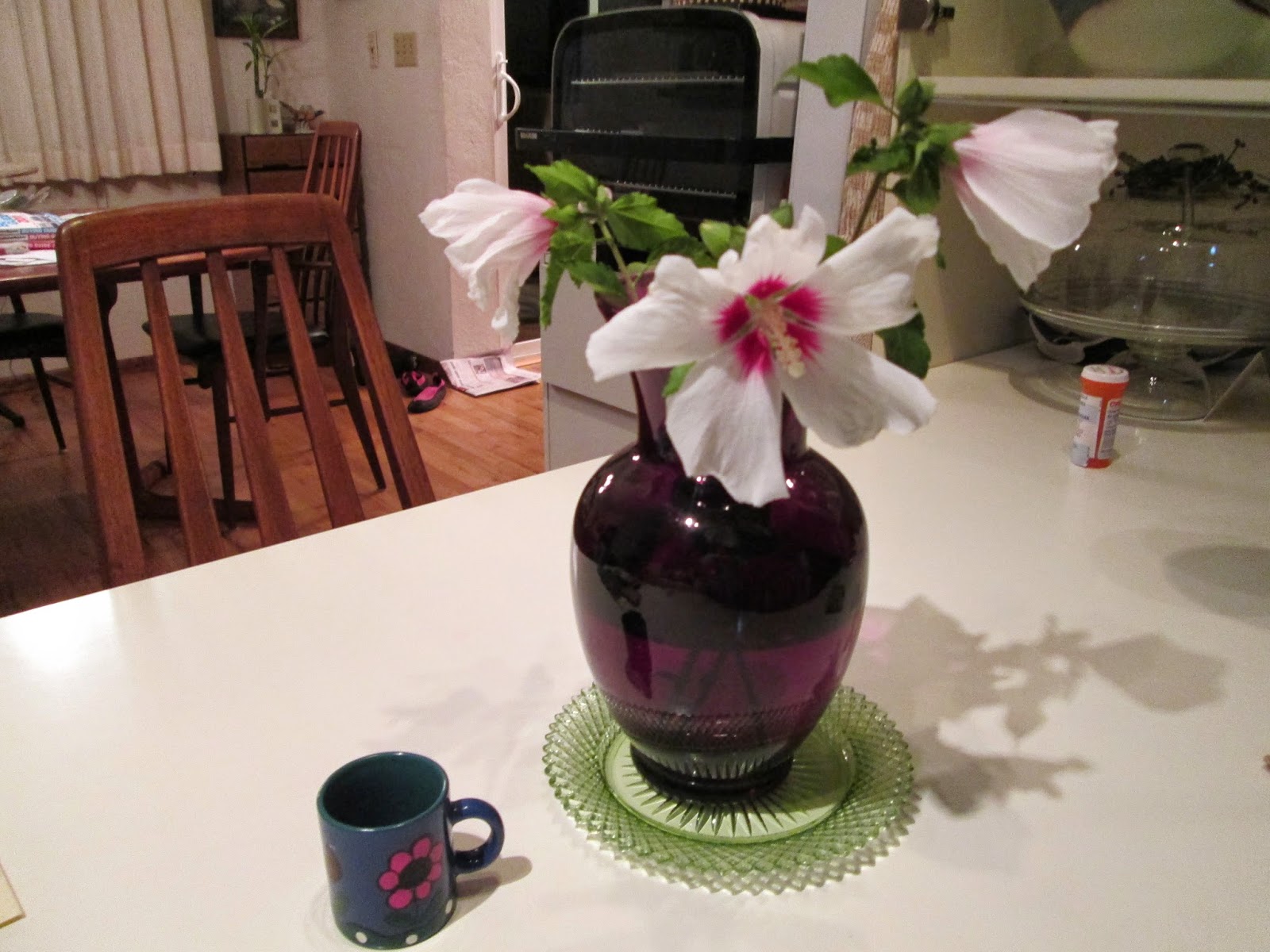 Then in early October Mom and I had been emailing casually about Sebastian, her health struggles, Oliver's new interest in "school" (dagis), and our pending move to France, which she also looked forward to (one winter visit to Sweden after Oliver was born was enough she said). Plus she still wasn't very stable with her walker, nor comfortable on long trips.

On October 16 she wrote:


You were right Jeff about the nerves being involved in my health issue...I know seeing a neurologist was a clue... I have ALS, commonly referred to as Lou Gehrig's disease.  It was confirmed by the neurologist at UCLA.

However, I do have some good news...

How like Mom. All the good news in the world couldn't drown out the bad news courtesy google, then emailing family with connections in ALS research. ALS is (typically) terminal, merely a question of months or a few years. (ALS is also unusual in women, and certainly unusual in the 70+ crowd. However these factors would work against Mom, not for her.)

In November Sebastian was two months old. Mom had neck surgery, encouraged by a doctor in Fresno who thought he could increase mobility for her. I don't know if it brought her comfort, but the hope of medical improvements is almost always worth something. 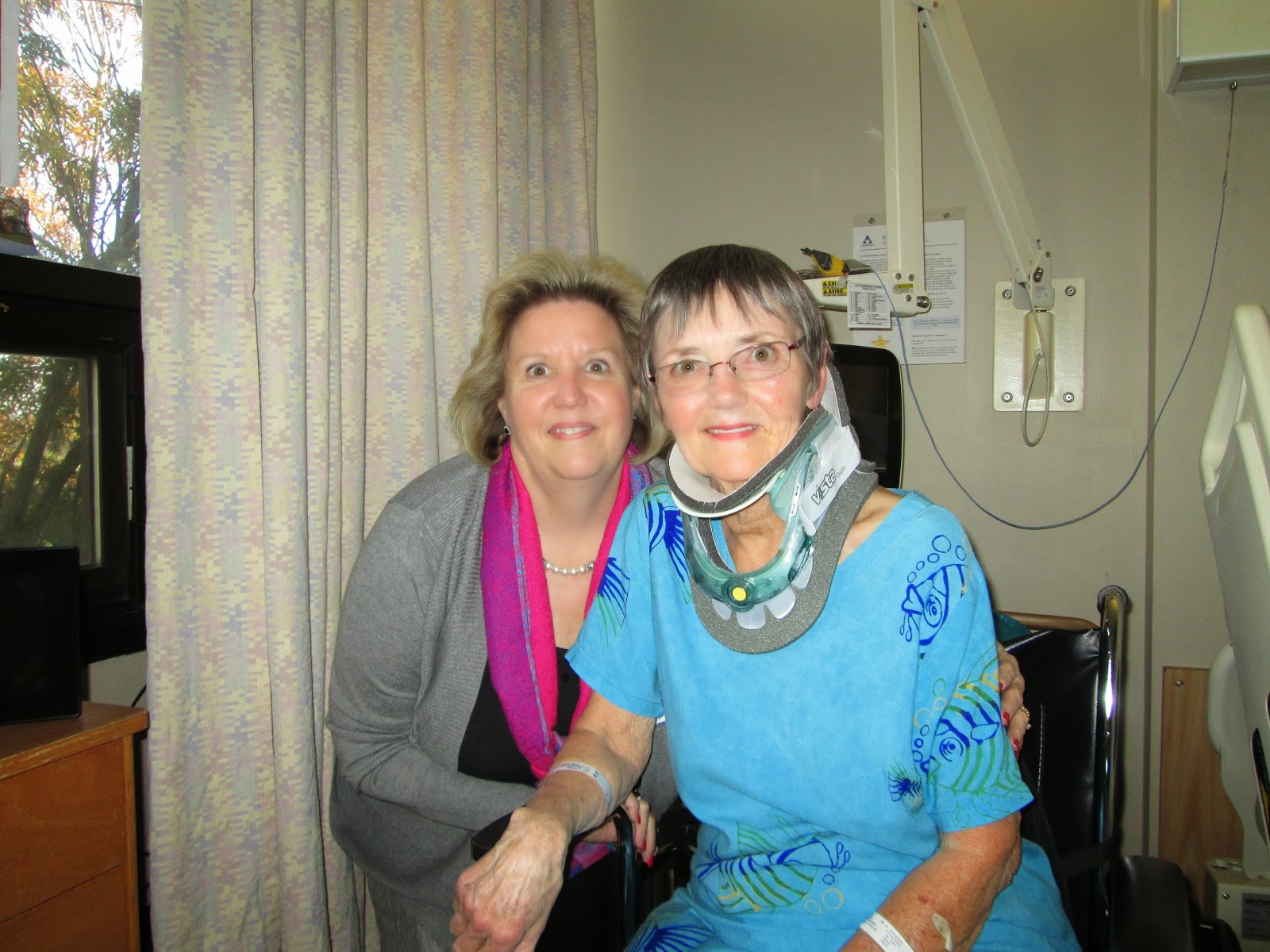 Back in Sweden we were doing the new-parent-all-over-again thing.

And about there we started this blog - where we packed up and shipped off to Paris (December through January), which meant an insanely focused time for the Euro branch of the family.

Then my wife Elena started her first term professing in January - nominating me stay-at-home dad, instead of the more American term "daddy as babysitter". Somehow the kids survived; more remarkably, somehow we pulled off a spring break trip for all four of us to visit Mom in Porterville, and for her to meet Sebastian.
This was amazing, and unanticipated, but also extremely important. We knew finally that Mom might have a mere couple years left, which was so shocking. Mom was already wheelchair and/or walker bound, which was a surprise in itself. Her food was all managed through g-tube already, and initial issues with ALS - swallowing, motor control - were already a factor. 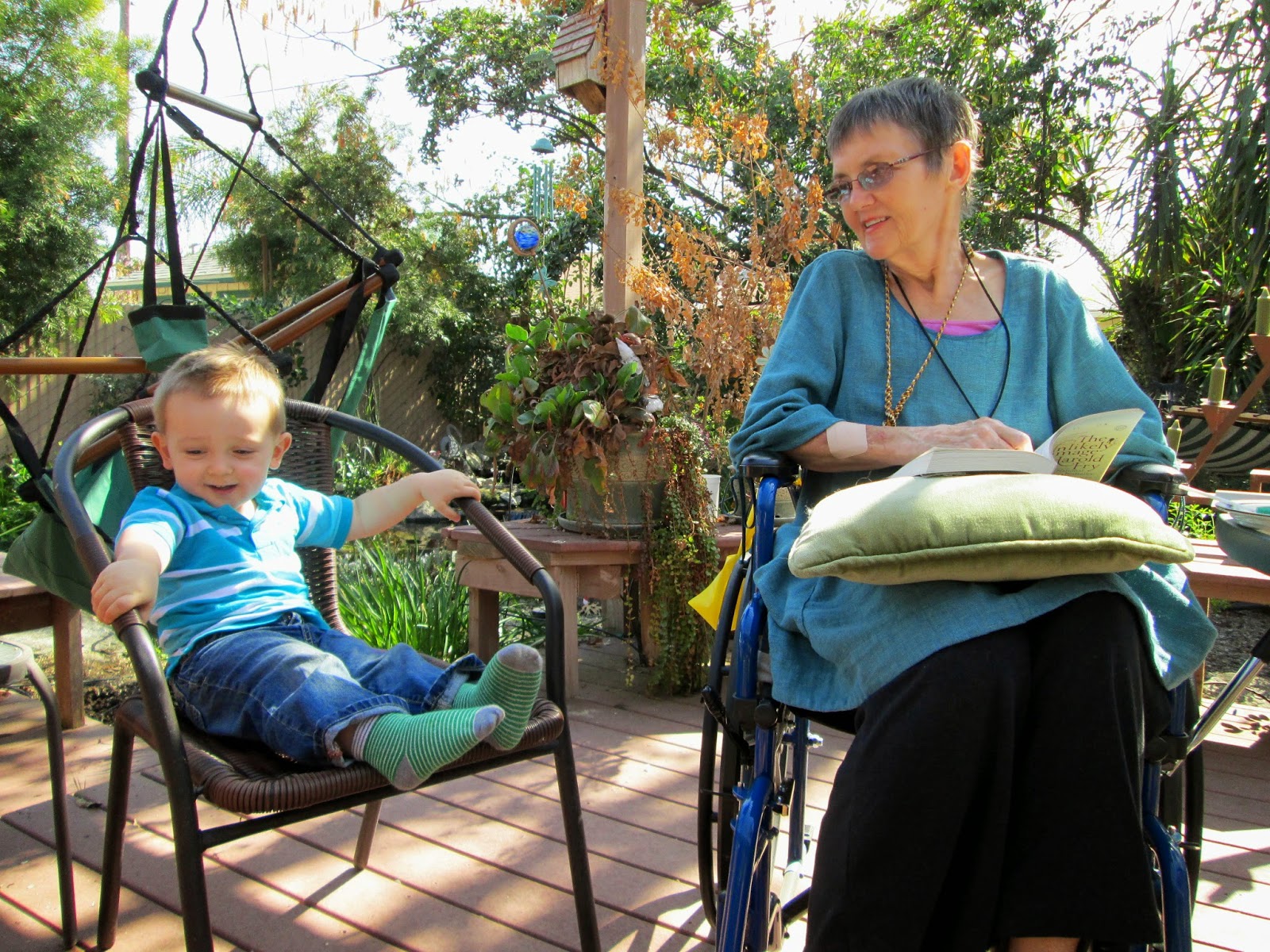 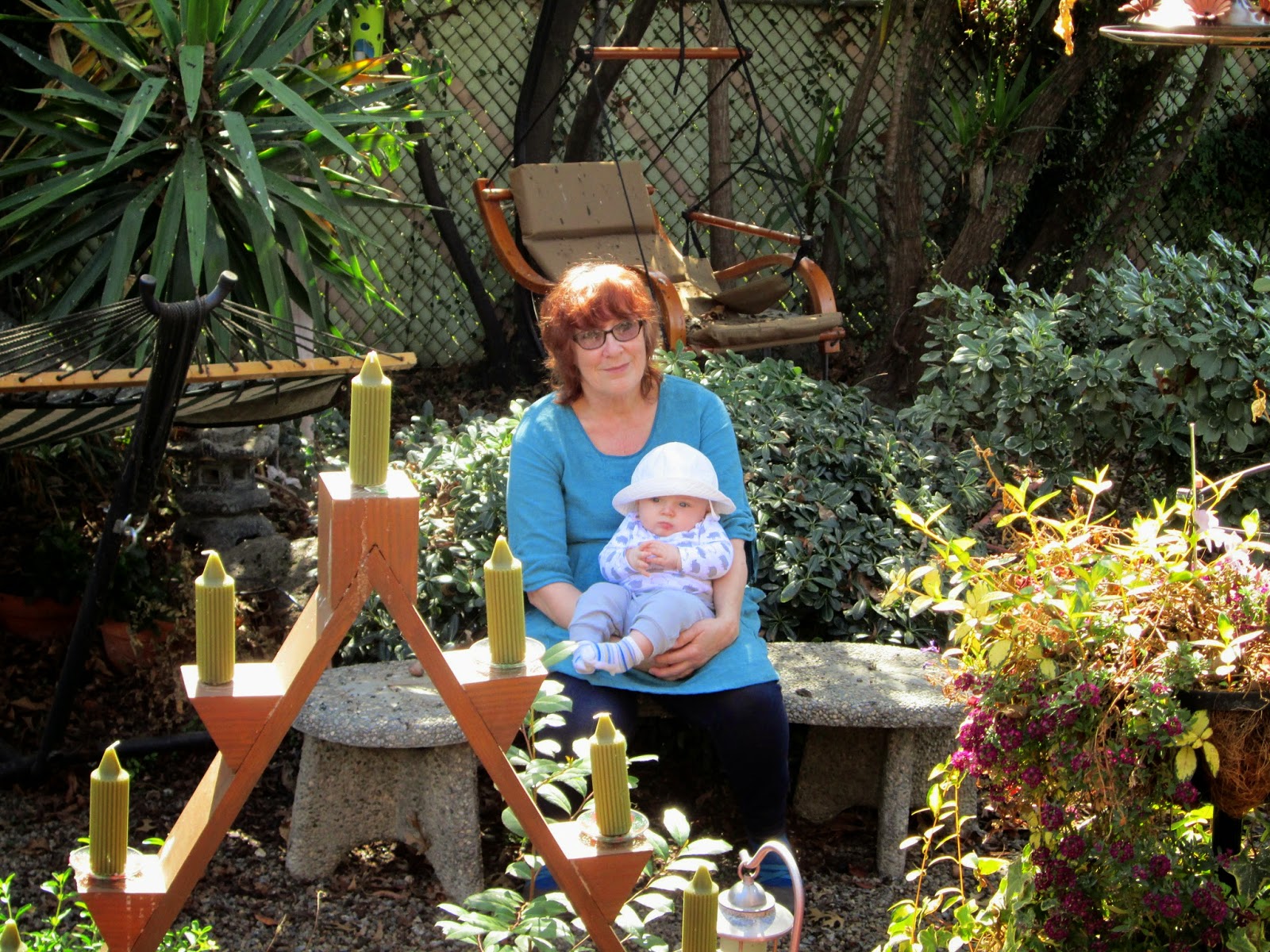 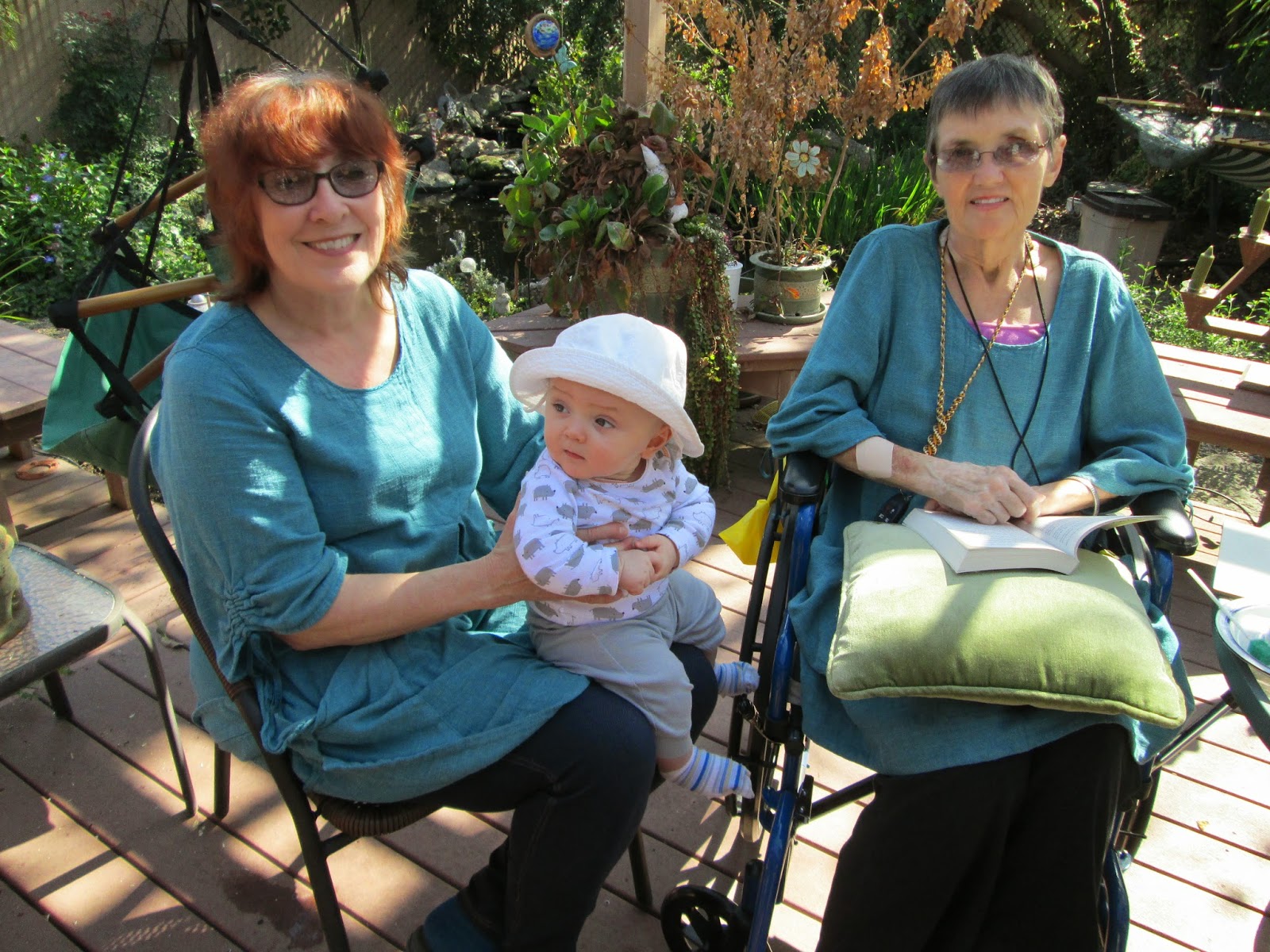 Then suddenly we left Porterville once more, after a hard goodbye. I thought it could be our last - and out of utter frustration I told her it was simply 'unfair'. No other word could describe my feeling of loss of continuity, as this was my only parent - me, her only son - and finally, grandkids. Something she'd mentioned before the Y2K bug was a thing. And unfortunately for Mom and the rest of my family it was their last visit, except for a couple short Skype sessions. 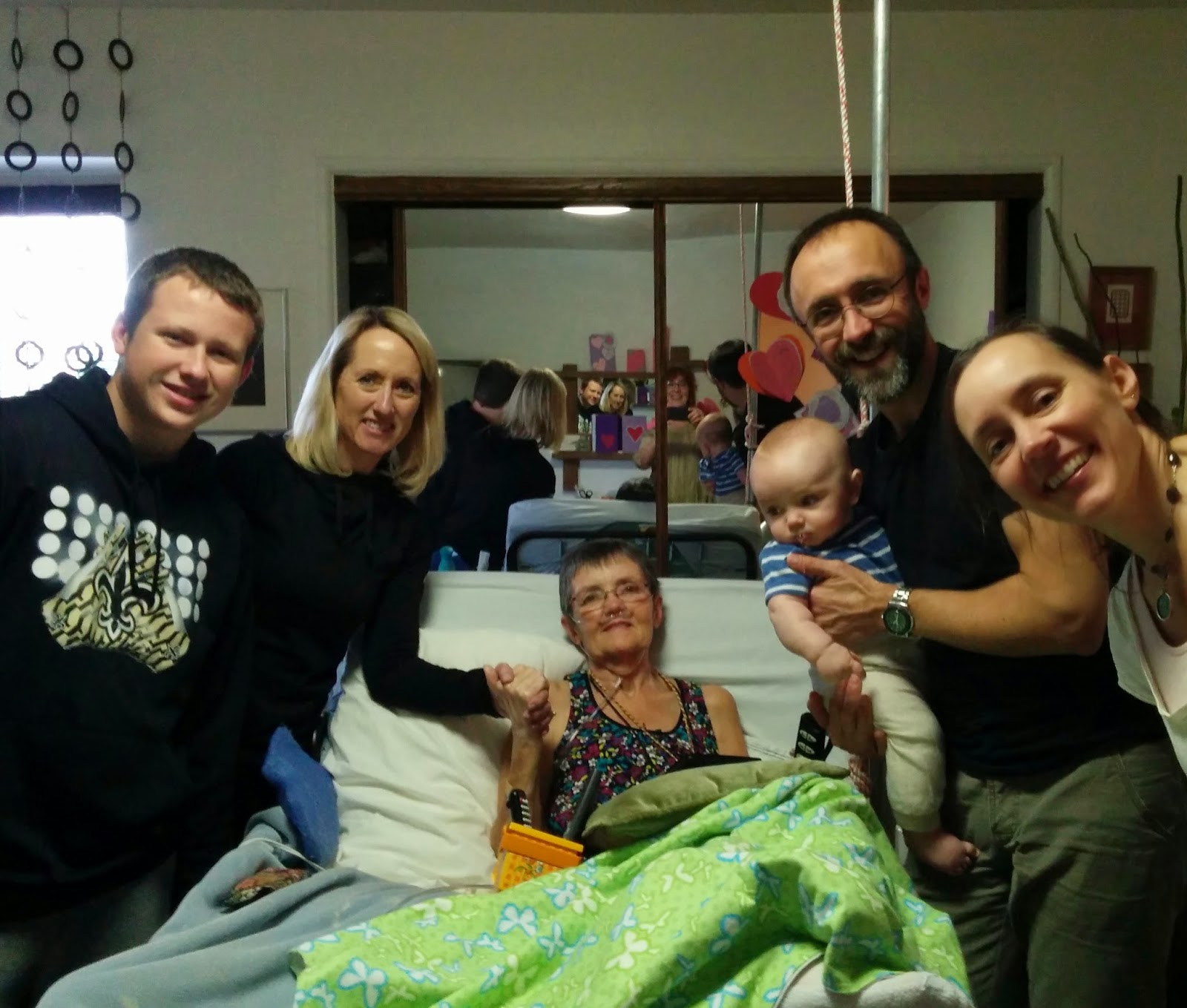 And next thing we heard in Europe there had been another fall. Things took a rapid decline and there was a conversation about at what point Mom would need to leave home or begin hospice care there. She started with Gentiva Hospice that last week of April I think, and I arrived in Porterville a little after 6 am on May 1. 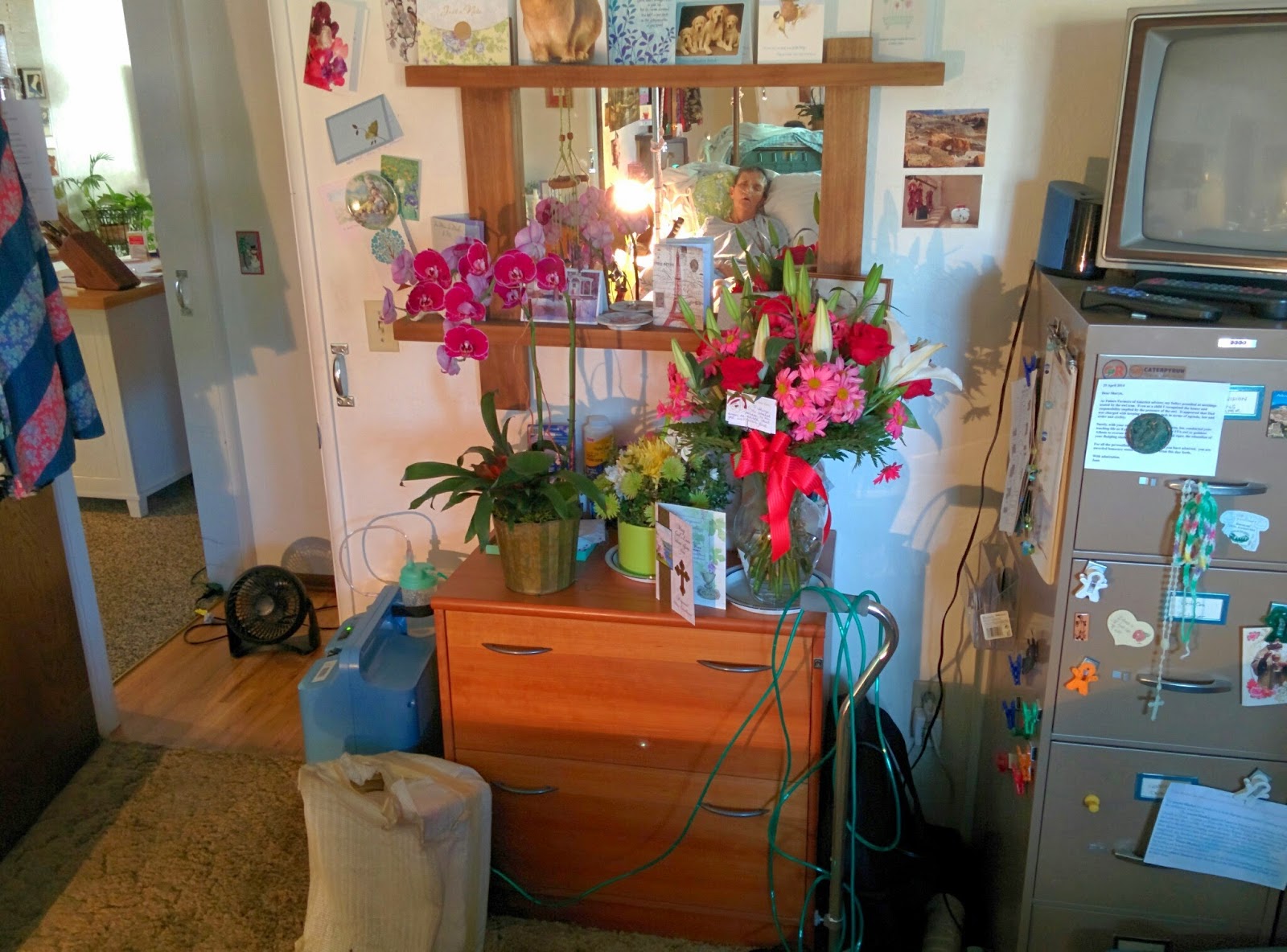 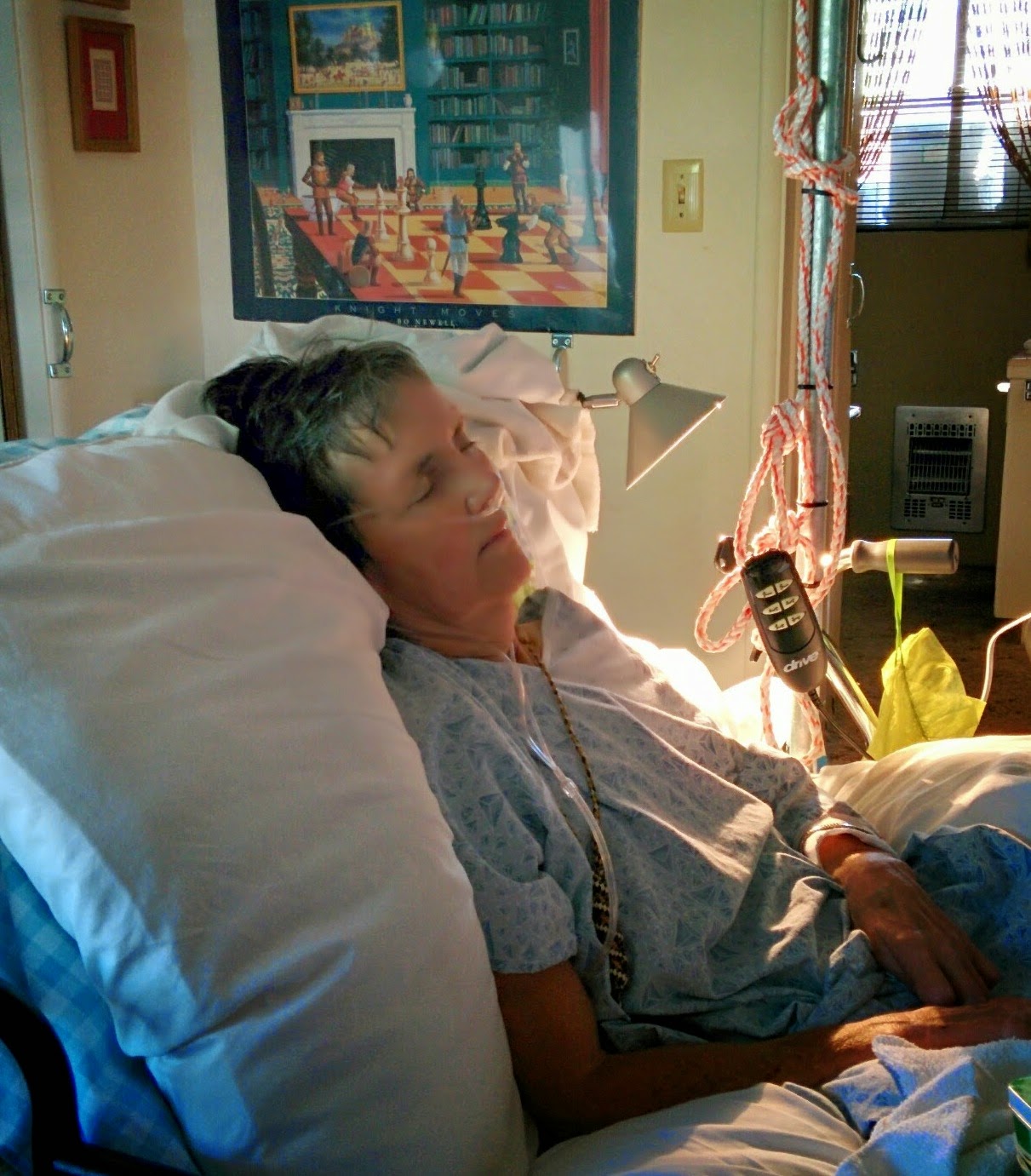 It was the community support, outpouring of care, and many hands of "Sharyn's Village" which sustained her as long as she went. Mom passed, alert, aware of my presence, and with a sense of determination, a bit after midnight on May 18. She was commemorated with a public service held at Jim Maples Academy on May 30, with a private home service the Saturday after. Here it is well into January and I've near given up on this blog - one windmill too many? And I know I have to find a new skin ... That icon is tired, even in my world of subtle hyperbole and misused metaphor.

French - the language - took a back seat to the boys, a little project work, the logistics of moving from a flat with lots of built-in storage, wardrobes and bookshelves (though not one built-in soap dish) to an apartment where the only thing built in are three soap dishes. Merely figuring out the recycling schedule for the massive amounts of Ikea-flatpack-generated cardboard over the holiday took a ridiculous amount of focus. But now we own a refrigerator, oven/range and something called a combo washer/dryer which still freaks me out.

But we've also figured some stuff out: our favorite local boulangerie, the washer/dryer child lock, and we're on something like our fourth trip to Ikea. I stopped Facebook check-ins there, getting embarrassing.

AND we just learned about "la gallete de Rois", King Cake, which is eaten by Parisians mostly on January 6 (Epiphany). This is a puff pastry tart with a surprise "something" (usually a small figure) baked which earns the finder "king/queen for the day" and a little paper crown. We picked up such a tart, Oliver's been wearing the crown around since, and just learned we should've been looking for the "something" ... luckily after thawing the last couple slices for tonight's dessert it made an appearance, and we crowned Elena - who even remembered to use the French phrase "J'ai la fève!" when she found the little plastic giraffe thing. (We haven't participated in the Roman tradition of killing off the recipient of the fève.)