As in, "Welcome To France", silly. But I stole it, first from David Lebovitz - former pâtissier of Chez Panisse, author of My Paris Kitchen and fellow expat - who introduced us to the concept of WTF days in his blog. Then there was that Taylor guy and his WTF, France show...what they have in common is this really interesting annoyance blended with forgivable fondness for their adopted country.

Five years ago this week we bought our flat in Sweden. That was after two full years in the country, and one permanent work contract, and a pretty rough level of svenska. It was awesome. So awesome we hope to wallpaper some future kitchen the same way someday. But ... when?

In France - year four - I've just finally had our car licensed here (and that was simply replacing Swedish plates with French plates, theoretically simple in the EU!). But it feels like we're as far as ever from buying our own space. And that - maybe more so for an American - goes a long way to making a community feel like a home.

Am I blaming France? No, others have managed it. But listing our obstacles up to now might include:
And so we're in the same ground floor 1960s place, as strong a contrast as possible to our Swedish flat: peeling wallpaper, bad natural light, questionable mold and paint for young'uns. But we have an awesome gardien next door, the building has decent heat, and a basement parking that only floods a couple times each winter. And the school district rocks.


But I think we're actually ready to pack it all up again, move into a bigger shell. Hopefully before I can't sling wallpaper.

Some more Lebovitz - his "first", 2008 - includes a cautionary tale for those coming for the Paris marathon...

About Paul Taylor: A couple years back I found this Brit doing colorful youtube videos called "WTF France?" ... but with less wordplay. He changed to What's Up, France? (owned by Canal+) last year, and more recently has stopped to focus on standup, here.

"What have I got in my pocket?" (expat version) 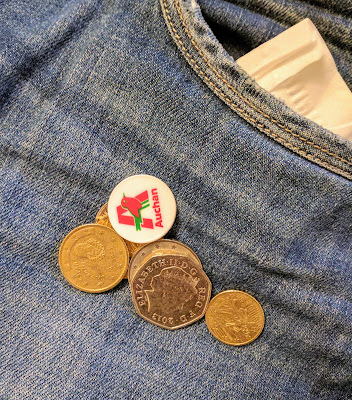 
I must've picked up some of the guys' coin "collection" and mixed it with whatever was left from a boulangerie run.

So ... why the inane, hobbit-y blog post? I'm looking for a new rhythm, posting one new (ideally interesting) thing weekly. (Having a sick kid at home limits a repertoire.)

Since finally receiving my work visa at the end of summer 2017, I've restarted French lessons; moonlighted as bike messenger for friends at Ma Petite Couche; and participated on a project with the CFH to translate the famous hydrogeology text Groundwater (Freeze & Cherry, 1979) into French. But I'm still looking for the right full-time post.

Tomorrow will be 2 minutes and 15 seconds shorter than today where I grew up in the central valley of California; here in our Parisian suburb it'll be 3 minutes 33 seconds shorter.


Where our kids were born, tomorrow will be 5 minutes 21 seconds shorter than today; but then the Swedes are well on their annual pilgrimage to winter, with "höstmörk", candles and ... well, darkness.

Like the Spotify playlist I'm listening to ... "Mörk ... höst":
https://open.spotify.com/user/ambianna/playlist/75qkB5sYqKtqubNfEP9lnS


But - surprisingly - I find I'm in an optimistic frame of mind, in spite of the season and mostly ephemeral illnesses: after years of little administrative wounds, I can legally accept a job here. The gap "cost" some productive years -- but then you can't price an education, and I've got more than when we arrived. And - importantly - the other 3/4 of the family are quite productive, everyone growing in their domain.

Now maybe I'll try to make these rare entries more frequent, shorter, and perhaps put a little pressure on self with some entries en français. I have to push written French along after all, and why not do it before I'm writing technical reports? Apologies in advance.

In brief, last week we finally got our visa renewals - and our application for the carte de séjour pluriannuel was approved, which specifies a "passeport talent autorise son titulaire à travailler".

This is huge news for us, as we moved here from Sweden for my wife's work just at the end of 2013 - with the understanding that within 30 - 36 months I'd have the right to work as well (as I always had in Sweden). So I enrolled in a French immersion program; took a Master's degree in my field; and within a month of being diplômé, our application was refused. Which confused our attorneys, depressed us, and threw a serious wrench in our plans.

After we got the notice from the sous-préfecture that new cartes de séjour were available, we rushed over, waited in the interminable line which looks like this: 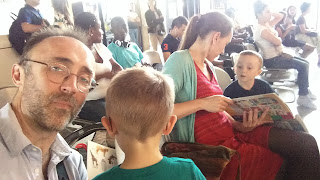 ...and ended with champagne ! 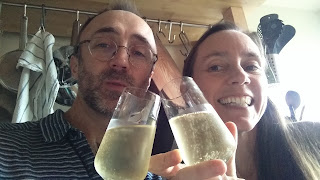 Okay, actually that was the next day ... since we didn't actually believe it's work out and hadn't chilled the bottle.

And we enjoyed Bastille Day 2017 more than we have since moving here. But the next move isn't trivial either ... of the graduates in my cohort, only a couple of the dozen have found their travaille de rêve - but at least now it's possible.
Posted by Jeff at 12:32 PM No comments:

During my Masters internship I'm looking at a lot of surface water models, setting up a "scoreboard" to assess what types "perform" best under different conditions (peak flood events, long droughts), for different latitudes and regions ... and this taking place at IRSTEA in Antony (near Paris), a research organization with an extremely long history of excellent numerical models, including these:

This morning a friend sent me a podcast (99percentinvisible clearly has roots in public radio) called America's Last Top Model which I listened to on the way to work, and which is perfectly awesome -- it introduces a scale physical model of the Mississippi River basin, an amazing effort for anyone into train models, Legos, or generally playing with water in dirt...


The Army Corps of Engineers (CoE) project was motivated by the devastating floods of 1927, and construction finally started in the early 40s -- since the US ACoE was a bit tied up at that time, they used German and Italian POW labor from Rommel's N African campaign...

Some more links:
And this student project to open up access to the public:
Now I gotta get back to work.
Posted by Jeff at 11:11 AM No comments:

Note that I have been making a gross over-assumtion of my remaining time – this isn’t a 34-week internship, but about 26 (or 25 with vacation). The 34th week of the year (beginning August 22) will be my last week, but since my 2nd week was week 10, my plot has been quite wrong.

We also simplified the wording on the display again; I need to follow this with database logic to be sure names are clear and sensible (self-documenting).

I’m also adding a layer of reactivity BEFORE the filter function; now we have a box filled by database which lists which packages are available:

This week I need to:

Old Notes (for my reference):

Got access to a 2013 netCDF [development branch for SOS DB] (https://svn.52north.org/svn/swe/main/SOS/Service/branches/52n-sos-netCDF/), so I’ll look into that this week to understand better our options for accomodating netCDF files (a soft requirement which we won’t implement without motivation!).

Keeps coming back up (particularly for multiple users in web app!) but not dealt with: + http://shiny.rstudio.com/reference/shiny/latest/session.html

Some NetCDF files from our friends at ECMWF: http://apps.ecmwf.int/datasets/